First let me say: All of my nerves leading up to the Blue Bloods finale were for nothing. I am so used to shows going for shock value during a finale that I expected that from Blue Bloods, too. Last season’s ender was happy, so I assumed it would be asking too much to have two in a row that ended with blissful Jamko shipping milestones. I was totally wrong.

Blue Bloods gave us happiness for the entire finale. Well, for me, anyway. I did notice on the night of that there was a bit of outrage on the twittersphere.

We’ll for sure dive into that later. For now, let’s talk about the episode.

END_OF_DOCUMENT_TOKEN_TO_BE_REPLACED

It’s the second to last episode of the season! Are we ready? I am. I am ready to get to this wedding we’ve been anticipating since last season’s finale, but that won’t happen until this Friday. So, until then, let’s talk about last Friday.

END_OF_DOCUMENT_TOKEN_TO_BE_REPLACED

We’re back with another episode that has season ending gravitas, this time for Erin. You can really tell we’re reaching the last few episodes because stakes are increasing and individual decisions from earlier episodes are leading to consequences. Let’s discuss.

END_OF_DOCUMENT_TOKEN_TO_BE_REPLACED 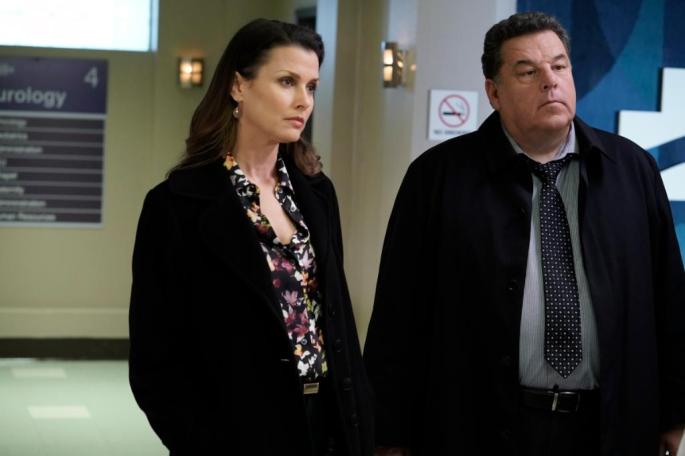 We’re back from a break and, hopefully, we won’t see another break for the remainder of the season! Let’s jump right in to reviewing “Past Tense”. This was a pretty action packed episode with a lot of familial themes all around.

END_OF_DOCUMENT_TOKEN_TO_BE_REPLACED

We are back from a two-week hiatus! I hope everyone enjoyed the break and managed to find something to fill their Friday night in its absence. I know it was probably difficult. Blue Bloods is not an easy habit to kick, and why would you ever want to? Let’s get started, shall we?

END_OF_DOCUMENT_TOKEN_TO_BE_REPLACED

Well hello, my fellow Blue Bloods fans! This week’s review is going to be a little different than my previous reviews. I want to break my normal pattern for one week because I have one thing I need to express at length.

I have said numerous times before that this show gives us a near perfect example of leadership. In my personal ranking of fictional leaders, I would say Frank Reagan is tied with Josiah Bartlet from The West Wing. What makes a good leader is not being perfect or making the right decision every time. No, what makes a good leader is being able to say “I made the wrong call and now I need to fix it.” Ownership, personal accountability, a functioning moral compass. These are all things that we need in our leaders.

Frank Reagan is a good man, but he is not perfect. He takes the burden of his decisions seriously. When he gets it wrong, he feels it deeply and must do what he can to make it right. He is the kind of leader the world deserves. Thank you, Tom Selleck, and the writers of this show for giving us this example of what leadership looks like. We’re not seeing much of it in the real world these days. Watching Frank Reagan acknowledge that he made a mistake directly to the person he wronged was both encouraging and humbling. I absolutely loved his plot in this episode. So much so that I had to address it first and foremost. Hence the break from my usual formula.

Jamie is following in his footsteps. We saw him stumble last week and this week we see him hold strong professionally (while stumbling personally, more on that later). He admits to his mistakes and he wants above all else to do right by his officers and the people of New York. He is what cops should be and the idea we want to believe in. Eddie mentioned earlier this season that Jamie could take his career in any direction he wanted to from here. She specifically mentioned police commissioner, and I very much believe that she will ultimately be right.

The show is setting Jamie up for a larger than life career. The writers are making some decisions that I do not understand, but overall I believe that is their ultimate goal. Both men lead by example. They strive to be the best version of themselves they can be and when they fall short of their own expectations they are tortured by it. They resolve to fix it.

This is a quality we need in all of our leaders, not just the fictional ones. I hope soon we find those leaders or that they decide to stand up and act for themselves.

Alright, and now we go on with the rest of the episode. Since we started talking about Jamie already, let’s finish that up.

Jamie made good decisions professionally this episode, but bad ones personally. The minute he and his officer had that conversation, I knew he was going to open his big fat man mouth and say something dumb. You know, like calling his and Eddie’s wedding “a waste.” His point was not a bad one, but the way he approached it was the worst possible way to do it. You tell her this after you’ve been planning for months? You tell her this in the middle of looking at a location? And you phrase it like that? Oh, Jamie. You are much smarter than that.

Thankfully, our boy wised up by the end, and it was worth it for the emotional scene we had at the end. Jamie telling Eddie she makes him better and offering up the perfect compromise with a beautiful location. Though, I’m still not sure if that means they’re going to the courthouse or not? Or how I would feel about it if they did. This is Eddie’s one and only wedding and I want her to be happy with her day. I’m not sure the courthouse would make her happy. Also I was deprived of seeing the proposal and I want to see at least some of the wedding, darn it!

Vanessa Ray delighted me this episode, especially in the family dinner scene. She was the perfect mix of friendly and mad. Her interactions with Jamie were very pointed but not nasty.  I also loved her outsider’s perspective on Reagan family dinners. Because she is right, sometimes it is about making sure the other guy is wrong. Plus, the way she turned to Jamie and said “I like him. I hope you turn out like him” was a stunning read on those lines. Ray as Eddie continues to be a delight.

Danny is back to carrying the procedural aspect of the episode. I loved last week’s plot for him even if I didn’t get the chance to review it. I loved seeing him as a neighbor and a dad first, cop second, for once. Donnie Wahlberg is so brilliant in the way he plays Danny as a parent. He cares, but he’s not soft or warm. He’s as recklessly hot headed while he parents as he is while he works. But, I will say, seeing Danny master the procedural aspects of these episodes proves how brilliant he is. He was meant to be a detective. He reads people exceptionally well and can put pieces together faster than most.

Erin’s plot was a heartbreaker about motherhood where no one really won. One mother lost a child, and another feels like she failed to protect hers. Erin made the right call. This young girl needs help and she won’t get it if she’s sent to prison. It was a rough decision, but Erin got it right.

The scene with Erin and both mothers in the conference room toward the end of the episode was devastating and brilliant. Watching one mother take on the blame for her daughter’s mistakes, and then watching the other immediately begin to blame herself for the death of her son was the type of boomerang that makes my chest ache. The speed with which everyone in the room spoke up in that moment was beautiful. They would not let this woman blame herself for a tragic accident she could not have predicted. The moment where she accepts the apology but doesn’t not offer forgiveness was so real.

Not everything is as simple as forgiveness. The heart is a complicated thing and it can logically understand the circumstances, but processing that logic into your emotional state is not easy or instantaneous. Grief is the most heart wrenching emotion of them and forgiveness takes time. That moment was real.

This show continues to exceed my expectations and I cannot wait to see where the rest of the season leads us. The Reagan family learns and grows together and I love watching them do it. Until next episode, my friends!

Blue Bloods airs on Fridays at 10/9C on CBS.

This week’s episode was called “Handcuffs” and I won’t lie to you, there were times this episode was very frustrating to watch. Much like our characters, I had conflicting opinions on a lot of the decisions that were made. So much of this episode’s plot was interlinked that I’m not sure how to divide it up this week. But let’s go ahead and discuss.

END_OF_DOCUMENT_TOKEN_TO_BE_REPLACED

I love how Blue Bloods manages to stay so relevant. This could very easily become a show that doesn’t adjust with the times. It has a solid audience that will always come back, mostly for Tom Selleck, Donnie Wahlberg and Jamko, so the writers could decide that’s enough and play it safe with standard procedural storylines. But they don’t. They continue to explore topics like diversity, sexism and the ramifications of public opinion; and they always do it with class and intelligence.

END_OF_DOCUMENT_TOKEN_TO_BE_REPLACED

Wow, was this episode ever twisted or what? Mind Games was definitely an appropriate title. So many conflicts, so little time. Let’s do a quick rundown of Blue Bloods third episode of the season, shall we?

END_OF_DOCUMENT_TOKEN_TO_BE_REPLACED

Let me just say, there are certain things I have come to expect from Blue Bloods and, while last week’s premiere was excellent, this episode felt more like what I really want from this show.

It tackled difficult topics, explored social concerns, featured family struggles, and still one of our Reagans was in jeopardy. Every bullet point that I look for in a truly excellent Blue Bloods episode was ticked off the list this week. Let’s talk about what made this episode particularly strong.