Wow, was this episode ever twisted or what? Mind Games was definitely an appropriate title. So many conflicts, so little time. Let’s do a quick rundown of Blue Bloods third episode of the season, shall we?

Let’s start with just one thing I’m a little bummed about thus far: Danny’s plot lines are very case focused so far this season. Maybe last season spoiled me, but now that I’ve seen Donnie Wahlberg at his emotional best, I can’t go back. Let’s hope in the next few episodes we get a storyline with some really personal stakes for Danny. I’d like to see more of Danny as the single dad, as I really enjoyed watching him adjust to that last season. Wahlberg ripped my heart out on more than one occasion.

But I will say, at least his case was interesting! It had a lot of twists and turns and, honestly, felt like it came from a much more procedural focused show. I felt awful for the wife in this scenario and truly disgusted by her husband and his girlfriend. What a terrible thing to do to someone. And the way the husband and the girlfriend turned on each other was shocking too. She didn’t even try to give the pretense of solidarity with him, which, by the way, gave me serious Sharon Stone in Basic Instinct vibes. Just wow. Kudos to the writers for coming up with that plot, even if I would have preferred more of a personal storyline for Danny.

Everyone else had very personal conflicts in this episode, so that more than made up for the lack of one with Danny. 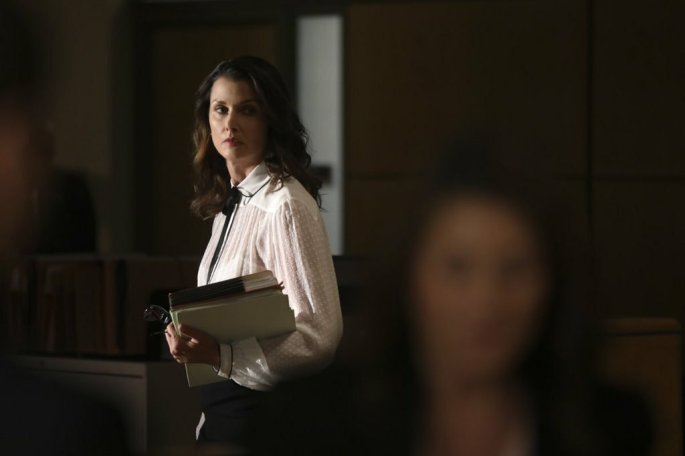 Bridget Moynahan plays Erin spectacularly well every episode and, usually, I can see the sense in her point of view. But in this episode I have to say I found it very hard to take Erin’s side in her fight with Anthony. Kudos to Moynahan and the writers for letting Erin be flawed. I love a strong female character who is not a shining example of perfection, which is exactly what Erin is. She is good, but she is not perfect. She embarrassed herself and took it out on Anthony. I was relieved to see them clear the air at the end of the episode but I was truly afraid this would put a long lasting rift between them.

I want to take a moment to gush about Steven Schirripa. Do you mind if we take that moment? Because the scene with him and Mrs. Costello was truly adorable. Anthony is earnest and sincere and I can’t imagine anyone but Schirripa doing that any better. He is warm, friendly, and open and he just makes me want to hug him. Is that weird? I don’t care. I want to hug him and I don’t care who knows it. Schirripa as Anthony is a big teddy bear who wants to see justice done, no matter how seemingly “unimportant” the case appears to be.

The scene of the two of them searching each other out to “bury the hatchet” left me with warm and fuzzy feelings. The idea of her going to his office and then him going to her office and just missing each other was so adorable. I love their friendship. They’re able to fight, disagree, and disapprove, yet still come together at the end of the day and forgive each other. They are true partners. I’ve said it in a past review and I’ll repeat it again here, Schirripa is the best gift they could have given Moynahan. They work beautifully together.

Frank ran a “Red Alert” drill with his 1PP staff, except Garrett was caught up at another meeting and missed it. It’s a classified drill so that, unfortunately, left him out of a big secret. I felt so horrible for Garrett the entire episode. We’ve seen that he already feels like he’s at a disadvantage simply because he was never on the job like Baker or Sid and this seemed to reinforce that misconception.

Gregory Jbarra as Garrett is always a character that amuses and annoys me. Sometimes I feel he throws unnecessary or unsympathetic tantrums, other times he acts as a much needed outside perspective for Frank, and then there are times — like this week — where I genuinely feel for his situation. When he admitted to feeling “deleted”, my heart went out to him. I have definitely been there before. Bravo to Jbarra for finding that balance with Garrett. I’ll say it again, I adore that the executive producers and writers of this show allow these characters to be flawed, realistic human beings. (Side note: I need a reaction gif of Baker’s face after Garrett storms out of Frank’s office and the camera stays focused on her through the office door. Hawk’s awkward face there cracked me up.)

And then we come to the final scene in this office conflict, where Frank shows his heart. I love Tom Selleck playing the pragmatic tough guy with a well hidden heart of gold. Tom Selleck can play goofy, he can play tough, but he’s best in roles like the leading men he played Quigley Down Under, Jesse Stone, or Crossfire Trail. Tough, but gentle. Stern, but merciful. Logical, but compassionate. He hits on all of those things in this scene. Frank’s heart shines through as he tells Sid, Baker, and Garrett how “indispensable” they are to him. He doesn’t say much, but he doesn’t need to. It’s in his expression and the way his eyes water. It’s subtle and heartfelt. These three people mean more to Frank Reagan than simply being valued staff.

They are an extension of his family.

That scene displayed for me the entire reason this show was built around Tom Selleck. He is a charismatic and talented actor who can say so much with so few words. That’s a rare ability in any artform. Selleck is a master at it.

While the rest of the episode was strong, I have to say this week the strongest story of them all belonged to Jamie and Eddie. I had to save them for last because I just have too many feelings and I needed to get them together into something other than a fangirl squeal or a swooning sigh. Otherwise, this review would have looked like my twitter feed (@loganmangell by the way.) It would have been in all caps with lots of emojis (the sobbing and heart eyes ones specifically.)

Eddie listening to those officers trash Jamie really amused me. Vanessa Ray is a joy to watch, especially when she gets fired up about something and watching her hold herself back as she hears these cops talk about her fiance was something I didn’t know I wanted. She’s immediately angry, protective, and worried all at once. Bless you Eddie Janko for looking out for Jamie Reagan. I adore you. You can immediately see how that changes something for her, we just won’t know what or how till much later.

And then we see Jamie in his sergeant stripes trying to act like a boss. The distance he puts between himself and Eddie is jarring, but I can see through it. He’s trying to act tougher than he is so that his officers maintain the image of him as their hard ass sergeant. Sorry, I tried to think of another term than “hard ass” but honestly that’s the only one that illustrates my point. They cannot see the soft Jamie Reagan that Eddie sees because they will take that inch and run all over him with it. I think Eddie, though, takes this distance to mean something else and it only furthers her concerns. (side note: I am loving seeing Eddie in all these casual outfits! Can I have her entire wardrobe? Because it’s gorgeous.)

That breakfast (dinner) scene? Adorably domestic and also telling. Does Jamie know Eddie or what? He knows by the way she’s hedging around a topic that she’s worried about something and he knows it needs to be addressed. If this is our taste of their couple dynamic then I am into it. The way he grabs her wrist for his “lie detector” and then corrects her when she’s exasperated with him is my new aesthetic (as the kids say.) I had a very fangirl moment when he pointed out that they weren’t dating they were engaged. Yes, because these two are already so in love that they can’t just date like any other couple. No, that’s not necessary. Not for them. They’re in love with each other and I’m in love with them.

But they’re still not done being the most perfect couple in all of television. Oh no, not yet. Because Eddie insists on minigolf, which of course Jamie Reagan is good at. What isn’t he good at (aside from public displays of affection apparently?) Eddie wants to talk and he knows it. She is not going to be able to be sneaky with him. He knows her too well. Which is when we find out that he proposed to her on a mini golf course. How absolutely adorable is that? Listen, fanfic author friends, I expect to see many one shots about this very scenario before the next episode airs, okay? I’ll be watching.

And then we get to the real issue. Eddie has changed her mind. She wants to transfer to his house. Now, I raved about the decision for her to stay at their old house last week. I thought it was brave and brilliant, so was I thrilled to see Eddie backtrack this episode? No. I was not. But Vanessa Ray sold me on it the same way Eddie sold Jamie. When she handed him those vows I threw in the towel on the “independent woman” rant I was preparing in my head.

Honestly, I am such a fan of Ray. Her delivery of the line “I don’t want them to just mean something on our wedding day. I want them to mean something today and tomorrow and every day after that” was stunning. Understated yet insistent. Eddie was confident and honest. Those vows aren’t just beautiful. They mean something. She’s going to stick by them through her own fears and insecurities. Eddie Janko is a fighter and this fight, this time, is for him. And then we were finally treated to a kiss. Our first one since Jamie wised up and put a ring on it.

I have to admit, it was totally worth the wait. Estes and Ray have the best chemistry of any romantic or platonic pairing on this show. I am so grateful that the show is finally taking full advantage of it. I’m excited to go on this journey with them and I cannot wait until next week to see what this couple gets up to next.

Season nine is already off to a tremendous start! I sense many more exciting things to come! Thanks for reading and be sure to join me right back here next week for more talk of all things Blue Bloods.

Blue Bloods airs on Fridays at 10/9C on CBS.