The third season of Netflix’s Spanish hit Cable Girls started with a bang. Drama, fire, mysterious deaths and a baby kidnapping all within the first episode was almost too much for my poor heart to handle. While I thought season 2 had been a little on the slow side, season 3 went from zero to sixty in record time and maintained the adrenaline throughout its 8-episode run.

Even though I have a few qualms with this latest season, I still liked it a lot better than season 2. Do you know why? Because Lidia (Blanca Suárez) was focused on finding her daughter and not in this eternal on-again-off-again thing with Carlos (Martiño Rivas) and Francisco (Yon González). Don’t get me wrong, I love the romance aspect of the show and I’m #TeamFrancisco all the way, but I absolutely loathe love triangles and I thought that was the one thing that took away a lot of my enjoyment in season 2.

Having said that, let’s dive into this, shall we?

These two characters are one of the things that really made me fall in love with this show. I am new to the Spanish television landscape and I am in absolute awe of the quality content they make. But what really sets them apart — and American shows really should take a page or two from their handbook — is how amazingly well they handle representation. Cable Girls is a show set in the late 1920s/early 1930s, and they not only write incredible female characters and the fight for women’s rights, but they also handle LGBT+ representation brilliantly.

I started the show knowing there would be a polyamori relationship. I didn’t know what to expect, because honestly, I had never seen a show tackle that particular kind of relationship. But Cable Girls handles it with such care and gentleness that it’s impossible not to root for them. And not only that — Carlota (Ana Fernandez) and Sara’s (Ana Polvorosa) entire journey together has been absolutely gorgeous to watch.

From their burgeoning friendship, to Carlota opening herself up to the possibility that she was attracted to a woman, while still being in love with Miguel; to Sara finally admitting to herself and to Carlota that she felt like a man trapped inside a woman’s body; and finally to that horrible, horrible “treatment” she went through last season, this show has done a beautiful job in telling their story.

Let’s not forget that this is set in 1929-1930, when being gay was considered a disease and a fellony, and to have a show tell a story of a complex and beautiful relationship between two women and a man in that time period is not only bold, but also necessary. That’s what makes Cable Girls such a fantastic show, because, despite the time period it’s set in, it is one hundred percent relatable.

I admit I missed Miguel a lot in season 3 and I wish we could’ve seen more of what he was going through with his addiction. It felt like he just fazed into the background and the spotlight was really on Sara and Carlota. That said, I could not be happier with their arc this season. I love that they have become essential in each other’s lives and that they’re living together and having each other’s backs through thick and thin. One of my favorite aspects of Carlota is her fight for women’s rights and one of my proudest moments was when she outted herself as Atena on the radio, despite everything she had already gone through.

Those final moments, when the bomb was about to go off, and Sara turned to Carlota and proposed? I was cheering out loud, despite their imminent deaths, and I sure hope they’ll be able to get married somehow next season.

I love Marga. I really, really do. She’s the sweet one of the group and her innocence and childlike wonder have always been one of my favorite aspects of the character. Nadia Santiago plays the hell out of that role and she did a wonderful job in season 3. However, she had the one arc I really, really disliked. Why, why would you introduce yet another love triangle? WHY? And a female character caught between her love for her husband and attraction to his twin brother? WHY?

As if the triangle trope isn’t already tired as hell, you go and add the most cliché twist ever? Why would you do that to a fantastic character? Santiago played it beautifully with what she had to work with, but the real MVP here was Nico Romero, who plays Pablo and Julio. While I didn’t really like the storyline, Romero did an incredible job playing the twins and each and every nuance that made them different from each other.

Every time they were on my screen together, I immediately knew who was Pablo and who was Julio and that just made me love Romero’s performance even more. Julio started out as a pain in the ass, but he quickly grew on me with his annoyingly charming charisma. By the end of the season, I really liked him.

Having said that, if I could tell which one was which, why the hell couldn’t Marga? It just felt like it was unnecessary drama, just for the sake of drama and a waste of potential for these characters. I love Julio, but I seriously hope she chooses Pablo at the end of this mess.

I have mixed feelings about Angeles in season 3. While I admired her so much last season and thought she was a strong, badass woman, I am still on the fence about the direction they chose to take the character this season. While I had absolutely no problem with her working for the police undercover, I hated that she decided to betray Cristobal.

Of course, when it all went to hell, she told him how Guzman knew he was a cop and found out he was actually married (rolling my eyes so hard at you, Cuevas. I loved you!), but it all still left a bitter taste for me. Do you know why? Because she chose to lie to him, instead of coming clean and saying Guzman was threatening her daughter’s life.

It felt like a step backwards in her development, when she had been doing so well in her growth as a character. Remember that terrified woman from season 1? She’s a glorious warrior now and I do understand that she’s a complex character and that sometimes you just make bad decisions in life. I just wish she hadn’t done it. 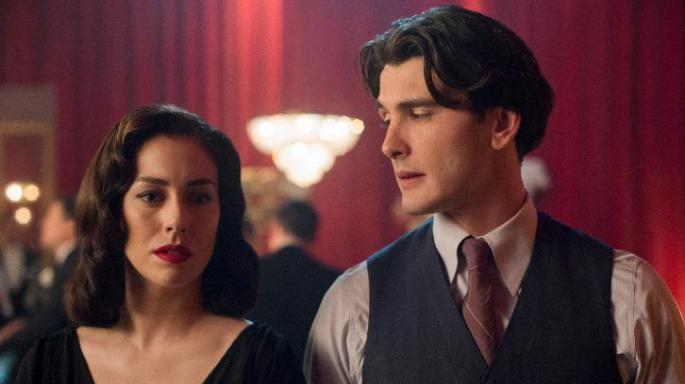 Where do I even start here? Lidia was my favorite character this season and motherhood did wonders for her character development. Gone was the indecisive girl who didn’t know who she should be with and, in her place, a ferocious mother appeared and it was absolutely glorious to watch. I’d already heard of Blanca Suárez before I started watching Cable Girls, but up until this season I thought she was just okay as a lead.

And then Lidia’s daughter was kidnapped. And holy sweet Jesus, Ms. Blanca Suárez, this was your moment. It was like a switch was flipped in her and Suárez was a force to be reckoned with. Her performance was nothing short of absolutely breathtaking and carried the show seamlessly through the entire season.

The love triangle was the last thing on her mind and she just wanted Eva back. She fought fiercely when everything seemed to be against her and everyone thought she was crazy, and Suárez played that brilliantly. I am #TeamFrancisco and I am so glad that, regardless of whatever happened between them in the past, they are still friends and have each other’s backs through everything. He was the one who supported her in her quest to find her daughter and his faith in her never wavered.

While I liked Carlos a hell of a lot better this season — I absolutely hated his guts in season 2 and wanted him to die a painful death for everything he did to Lidia — he was still mostly a pushover when it came to his mother.

Speaking of Doña Carmen, I just want to go on the record and say that she’s one of the most despicable characters I have ever seen in my life. Concha Velasco is a force of nature and she absolutely sells the overbearing, protective, evil mother figure, because I hate Doña Carmen with the strength of a thousand suns.

What she did to both her children was absolutely cruel. Having Elisa believe Carlos had died and that the best for her was to kidnap her own niece and hide in a convent was fifty shades of diabolical; but she didn’t stop there and also made Carlos believe that his sister AND his daughter had both been killed in that fire.

Who the hell does that to their own children?!

Have I mentioned how much I despise Doña Carmen? Because I do. I really, really do. I hope she rots in that prison cell, even though I’m sure she’ll find a way to bribe someone and we’ll never even see her step foot inside a prison in season 4.

Back to Lidia again, something that I’ll never understand is why she was going to marry Carlos. The guy was nothing but horrible to her in season 2, and the moment she finds out she’s pregnant with his kid, he’s back to love of her life status? How does that even happen? I know it was 1930 and things were obviously different, but my precious Francisco was willing to do anything for her, even raise the baby as his own. Why would she go back to Carlos?

I honestly hope that they settle this triangle once and for all in season 4. And by settle, I mean I hope she chooses Francisco. Because he is not dead. Do you hear me, TPTB? Francisco Gomez is NOT ALLOWED TO DIE. He deserves to be happy with Lidia without any drama coming between them. Are we clear? Good.

Cable Girls might have all the love triangle dramas and undercover work and people double crossing other people, but in its root, it’s really a show about five amazing, complex, badass women who are incredibly close friends and would do anything for each other.

These girls are the epitome of female friendship and each and every single one of their relationships with each other is treated with such care and handled so well, that it is truly a joy to watch their friendship unfold and grow and develop every season. I have only just recently started watching Spanish shows and I am absolutely fascinated with how amazingly well written all the female characters and relationships really are.

They have each other’s backs unconditionally and their conversations and the stakes they’re facing are very real and very relatable. But most importantly, they don’t treat female friendships as a conduit for petty drama and that is so incredibly refreshing.

I started Cable Girls after binge watching Gran Hotel, so I came for Yon González, but stayed for Blanca Suárez, Ana Fernandez, Ana Polvorosa, Maggie Civantos and Nadia Santiago. They are the very heartbeats of this show and I can’t wait to see where next season will take them.

Cable Girls has already been renewed for season 4 and it should return with all new episodes in 2019 on Netflix.